I received a TI 99/4A with a keyboard issue, it booted fine but the keyboard was not responding. Mashing the buttons a while would eventually press the required “any key” to bring up the options, this seems to imply there’s not a whole lot wrong. Time to open it up. 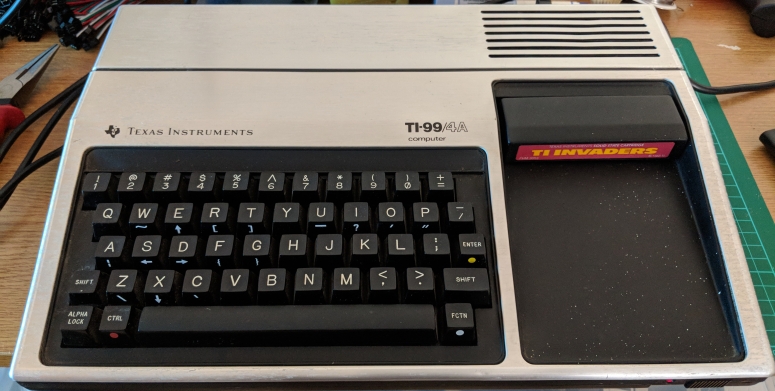 This thing is ridiculous, I’ve never seen so many screws to get into a machine. Everything inside is fitted to the top of the case rather than the bottom so once you open the case (7 screws) you then have to remove the power supply board, mother board and keyboard (9 screws). Even then to get at the actual motherboard there’s another 3 bolts holding the heat shielding together!!

Most retro home computers like the TI 99/4A use a simple matrix of buttons to connect the keyboard to the motherboard. It’s an easy task to find the pinout with some Googling and use this to test the keyboard header on the motherboard by shorting two pins at a time. Doing so with this motherboard showed that every key worked and therefore the fault must lie within the keyboard itself.

To open up the keyboard another 15(!!) screws need to be removed and the alpha lock desoldered. This allowed me to test the membrane without the keys. The membrane worked correctly, meaning the keys mustn’t be exerting enough force on it to activate the key presses.

After puzzling for a while over a solution I came up with a relatively elegant one! Using a hot glue gun I created a small blob on each key pad on the membrane, once dried the glue becomes very solid and creates a perfect dome on each area meaning the keys have less effort to press the membrane. Testing with the keys this appeared to mostly work, some keys still wouldn’t work. These keys I discovered seemed to not require the glue domes and so I removed the domes on all the non working keys. Voila! Keyboard fully functional!

I have to admit my glue gun was a relatively recent purchase but it has proved to be invaluable for so many wildly different reasons, this is definitely another one I didn’t foresee.